Ordinal-linguistic personification also called Personification or OLP is a neurological and a form of synesthesia in which the individuals having this condition have unique associations of ordered sequences such as months, days, letters and ordinal numbers with personalities. This form of synesthesia was first documented in 1890s due to this the researchers have paid little attention. 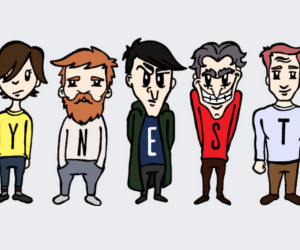 Ordinal personification normally co-occurs with other forms of synesthesia such as grapheme-color synesthesia.

To better understand this phenomenon, an algebraic equation can be used as an example. In most cases, an unknown value is always designated a letter "X". This Unknown value is always a characteristic of some operation such as the combination of some figures or numbers which are supposed to give the answer "X". In the same way, people with personification associate some letters, words or numbers with behaviours and character traits of an individual.

All that is known about what causes synesthesia, in general, is associated with how the brain perceives and processes information. With synesthesia persons, the perception and processing of the sensory have been always of higher magnitude than what other people experience. Similarly for Personification, it is believed that it appear from a cross-talk in the inferior parietal lobule, a region in the angular gyrus which is responsible for the representation of ordinal sequences and the region near the supramarginal gyrus which is responsible for the identification of personality.

Other speculations suggest that it can also be as a result of a retrosplenial cortex cross-talks.

The traits of people with OLP have been related to the culture of the Pythagoreans where odd numbers were related to males and even numbers associated with females. However, this is just an illustration of what personification is and cannot be categorized as so, but it could be understood as form of learned association.

Synesthesia has found its way to the Hollywood world where individuals have been depicted to have some weird capabilities. For example, in "A tree grows in Brooklyn", the character, Francie is able to learn basic mathematics by assigning numbers personalities to letters such as "X" and "Y". In a poem by Howard Nemerou, "A primier of the daily round", the poet personifies letters by assigning actions to them.