Hearing-touch synesthesia is among the over 20 varieties of synesthetic tendencies exhibited by the synesthetes who make less than one percent of the world's population. It is a very rare condition in which an individual develops tactile feelings or senses upon hearing some sounds. For instance, people have claimed that they are feeling some physical discomfort especially with the background noise of the plane. Such sensations are normally as a result of hearing-motion synesthesia. 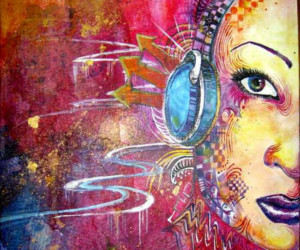 Just like most types of synesthesia, the real cause of hearing-touch synesthesia has not been established. However, Tony Ro, a neurologist at the City College of New York claim that it is caused by links that might develop between the parts of the brain that process sound and the somatosensory region which deals with touch.

Many studies have come up to find auto the relationship between the skin and the ears as a result of this condition. Some specialist in the field of neurology such as Elizabeth Courtenay Wilson suggest that the ears might have evolved from the skin in order to do more sophisticated and fine tuned analysis of sound frequencies.

Research has also revealed that people with hearing ability are much better at feeling a combination of extremely low vibrations applied on the skin with extremely weak sounds than when one of the stimulus is applied alone. The frequency of the sound and the vibration should be the same to be effective. Using the example of a mosquito buzz, people tend to feel their skin prickle with the buzz of a mosquito. This is because the sound of the mosquito has the same frequency as the vibration caused as a result of the flapping of the wings. As such, it can be concluded that vibrations can boost hearing sounds and vice versa.

Vibrations on the skin tend to make the sound heard by people appear to be so loud. For example, to a driver, the radio might sound louder than it sounds to the passengers. This is attributed to the fact that he is holding the vibrating steering or the gear lever that might be causing the experience. This is similar to the experience of people with hearing-motion synesthesia. Another common experience that can be used to explain hearing- touch synesthesia is when there is a screeching sound such as the scrubbing of the top of a bottle on the floor. Some people feel irritations on their teeth to an extent that they press their teeth hard or even scream.

This condition has led to many speculations in the field of auditory health with several research and studies currently being carried out to find out if the skin can actually be used together with hearing aids to help individuals with hearing impairment to perceive sound. It has been discovered through MRI scans that auditory regions of the brain can be activated during tactile stimulus. The major challenge remaining is where and how these two senses, sound and touch, can interact together in the brain to artificially cause hearing-touch synesthesia to solve hearing problems.