The people with lexical-gustatory synesthesia have unique tastes just writing or speaking words. Some of them may even experiment the sensation of temperatures or textures just hearing or writing words. Brain scans reveal that there is a distinguishable difference between the brain of synesthetes and that of others. These differences are visible in the parts that handle the senses of taste, hearing, sight, smell and touch. 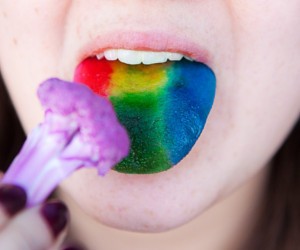 Unlike other mental experiences, the taste of words was not always believed to be a real occurrence that people could freely talk about.

Fortunately, to find out what actually is happening in the human head are established scientific tests in order to check the human perception.

The test for lexical-gustatory synesthesia works as follow. First of all, the researcher will call the patients of the study and they will play sounds of words for them. Those patients will record the taste that they are having. This test will be repeated six months later and if the results are consistent, they will be pronounced synesthetes.

People with the ability to taste words always find it as a double edged sword. Imagine having a sweet chocolate taste in your mouth and the next minute the taste of a disgusting expired canned beans. This could happen and all these tastes could be experimented in the same sentence.

Some synesthetes cannot mention some words such as "phony", "portable", "squirms" or "numbers" because of the nasty taste that they associated with them.

This does not mean that ordinary people's tastes are not stimulated by the sound words. For instance, the mention of bacons for breakfast would suggest a nice aroma and stimulate a great taste in your mouth during your morning workouts. Scientists have confirmed that the sound of the letter "M" trigger a mint flavor in your mouth, the "X" sounds have the taste of eggs and the "aye" sounds have the bacon taste.

Before a medical treatment will be discovered for this condition, words associative synesthetes can learn a new language to try to avoid those disgusting tastes. You can try to speak Spanish if English words cause such unbearable tastes to you.